Democrats and Republicans are locked into a dangerous game of seeing who will crack first over the national debt crisis, with the White House warning that the next few days could be stressful for world markets and Americans.

With time running out, congressional leaders from both sides met on Saturday after the dramatic collapse of negotiations between Barack Obama and the House Republican leader, John Boehner, on Friday. But the congressional talks broke up late on Saturday night after failing to make progress.

The White House chief of staff, Bill Daley, interviewed on Sunday on CBS, predicted that the next few days will be tense. “In the end, we may have a few stressful days coming up – stressful for the markets of the world and the American people.”

In an effort to reassure markets reopening after the weekend, he claimed he was confident a deal would be reached before the 2 August deadline. The White House refused to discuss what contingency planning is taking place in the event no compromise.

Obama is no longer directly involved in the negotiations following the sudden deterioration in his relationship with Boehner, who, in a breach of Washington etiquette, refused to return the president’s phone callson Friday. But Obama will remain engaged behind the scenes, and has left his diary for Tuesday, Wednesday and Thursday virtually clear. The Republicans and Democrats have been trying to ensure the other will be blamed by voters if it all goes wrong. The Republicans accused Obama, when a deal was close on Thursday night, of adding extra bits, in particular tax rises.

Democrats blame a hard core of Republicans in the House elected last year with Tea party support. The Democratic leader in the Senate, Harry Reid, labelled the Republicans as intransigent.

“Their unwillingness to compromise is pushing us to the brink of a default on the full faith and credit of the United States,” he said.

The business secretary, Vince Cable, broke the unwritten rule of non-intervention in other countries’ domestic disputes on Sunday by describing diehard Republicans as “nutters”.

Cable, appearing on the BBC’s Andrew Marr show, said: “The irony of the situation at the moment, with markets opening tomorrow morning, is that the biggest threat to the world financial system comes from a few right-wing nutters in the American Congress rather than the eurozone.”

Until now, market traders had appeared confident that agreement would eventually be reached but US legislators fear that, following the collapse of talks on Friday, there could be the first signs of panic when Wall Street opens on Monday as well as other markets round the world.

According to the US Treasury, America has to raise its $14.3tn (£8.77tn) debt ceiling by 2 August or risk defaulting for the first time. Economists warn a default will have a catastrophic impact worldwide.

The Treasury secretary, Tim Geithner, attempted to calm the markets by insisting the debt ceiling will be raised, telling ABC News that it was unthinkable that there would be a time when the US could not pay its bills. Geithner said that congressional leaders were working on a compromise package on Sunday to try to forestall any panic. But Boehner, in a Fox News interview, did not indicate that a compromise was near and instead blamed Obama. “I know the president’s worried about his next election. But my God, shouldn’t we be worried about the country?”

He said he planned to announce details of legislation on Sunday based on a Republican plan that would provide a short-term solution. Democrats are unlikely to support it. The White House countered that it was not interested in a short-term solution but wanted a “grand bargain”, a 10-year-plan for reducing the country’s burgeoning debt by cutting spending and raising taxes. Daley said that a short-term fix would fail to reassure the markets because the business world is looking for evidence that America is going to take long-term measures to reduce its debt.

Obama and Boehner were close to a deal on Thursday night that would have cut spending by $3tn, mainly through spending cuts but also through $800bn in tax rises.

Boehner claims that Obama, in an act of bad faith, tried at the last minute to add $400bn in tax rises and so he walked away. The Democrats claim Boehner walked away because he could not sell the package to Tea Party Republicans opposed to any tax rises. 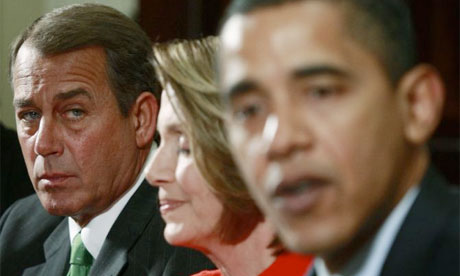 Danger: The US debt crisis has deepened after a collapse of negotiations between Congress leader John Boehner (left) and Barack Obama. Photo: Reuters/Jason Reed